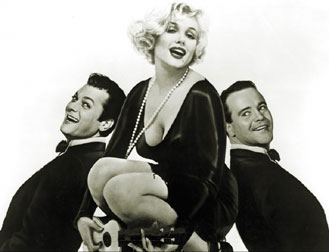 [Some Like It Hot] is known nowadays being a film that has people bursting out with laughter and then being told by their companions to shut up so they can hear the next line.

Wilder remembered a silly German film (“Fanfaren der Liebe”, 1951) in which two guys who want to work as musicians can’t get a job in a male band, dress up as women, and join a girl’s band. The film had done no business at all but it had stuck in his head somehow. But there are some changes in Wilder’s version. The film starts like a gangster film.The film was deliberately constructed so that the first few minutes the audience would be saying, "What is this? Why’s it called Some Like It Hot? It sounds playful when it’s not looking playful at all." But then there a few laugh moments, when you discover what’s in the hearse.

Talking about the mixture of genres going on this movie, it’s important to remember David O. Selznick’s reaction: "Billy, you can’t do that." Wilder cocked an eyebrow and took it as a provocation. He said, "I can’t do it, Mr. Selznick? I can’t do it?” "You have to understand. You can frighten the life out of Americans and you can give them a very good, funny time; but, be careful about confusing the two."

And what about the cast? Jack Lemmon is probably the person people most associate with the film and it’s the most outrageous performance. And them, it was Marilyn Monroe... Wilder had worked with Marilyn before on a film called “The Seven-Year Itch” and they had a terrible time. Marilyn needed 60-70 takes just to get the right line.

Another question I would ask about the film is the last line, one of the great last lines. Is it just a get-off? A way to end the film, in other words? The question is open... mind your word!